It is absolutely safe to input your income on this site! The data will never leave the computer or mobile device you are using. All the calculations are done in the web browser on your device using Javascript, and are never stored or shared anywhere.

However, we recommend that you do not share the results of your calculations with anyone unless you don't mind them knowing your income, since once someone knows how much the EU membership portion of your tax bill comes to, it is quite easy to work backwards and figure out the income from that.

As anyone who has done a tax self-assessment knows, tax calculations in the UK are very complicated and involve many variables.

This tool aims to provide as accurate figures as possible whilst avoiding vanishing down a rabbit hole of complexity in the quest for perfection. So while it should be accurate or near accurate for many people, it makes some simplifying assumptions in order to estimate your tax breakdown, for example that the gross taxable income provided is equivalent to your adjusted net income.

It does not yet take into account other factors such as:

The app has a hidden feature where it can display a breakdown of the calculations it makes. This is available by opening your browser's Javascript console if you are using a desktop or laptop.

If you looked at the breakdown and still see a difference between the results and what you might expect, here are some more possible explanations:

Having said all that, if you think you've found a mistake, we'd love to hear about it, so please contact us (see below).

No, as usual the full story is more complicated.

Firstly, income tax and NICs only account for 41.5% of all money received by the government. 16.6% comes from VAT, 7.4% from corporation tax, and smaller amounts from various other taxes / duties (see table 4.6 on page 108 of the Economic and fiscal outlook for Oct 2018 from the Office for Budget Responsibility).

The government obtained the 0.7% figure used on your annual tax summary as £5.4 billion in EU transactions out of a total of £790 billion total managed expenditure. In table 5.2 of HM Treasury's Public Expenditure Statistical Analyses 2018, you can see where this £5.4 billion comes from:

Other versions of this breakdown are available with slightly different numbers. Some variance can be explained by different approaches in accounting, different time periods, or uncertainty in forecasts. For example, this summary on fullfact.org is based on HM Treasury's statement on the 2017 EU Budget. Some examples of these differences are highlighted in page 11 of that report, which is a now out-of-date forecast: 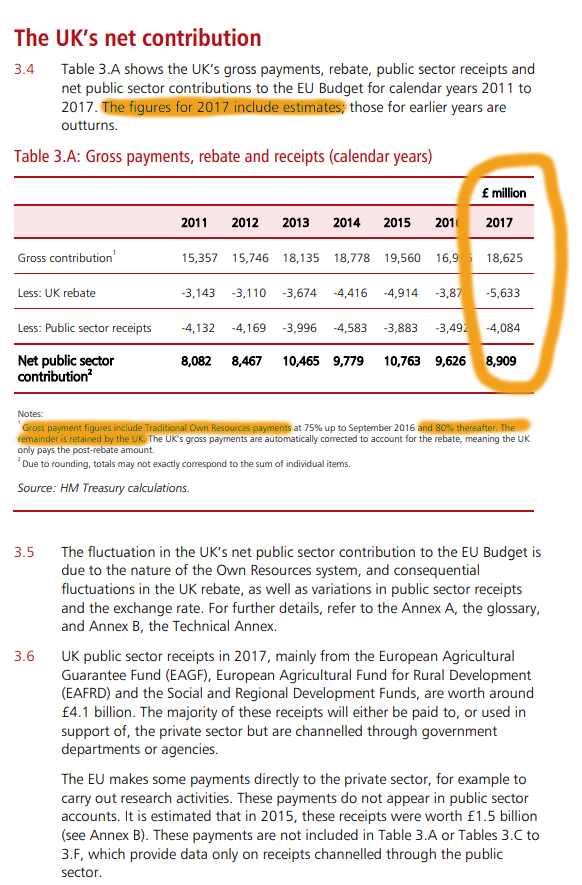 The UK's net payment to the EU is around £13 billion after applying the special discount of around £5 billion the UK gets, so the government funds the rest of the membership cost from elsewhere. However the true cost is effectively reduced to around £9 billion after factoring in the EU's contributions of roughly £4 billion to our public sector, and even further when counting contributions the EU makes directly to our private sector, such as research grants.

Furthermore, despite the illustration in your annual tax summary, not all money goes equally to all places. For example, National Insurance Contributions go into a ring-fenced NI Fund which counts towards state pensions, maternity allowance, jobseeker's allowance, bereavement support etc.. However the annual tax summary provided by the government appears not to take that into account.

Pretty much every fact on the site contains a link to a credible online source. We deliberately made many of the links a less obvious colour to avoid distractions from the main application.

This site was coded entirely by volunteers in our spare time. We built it because we believe the public were not provided nearly enough accurate information about EU membership leading up to and ever since the 2016 referendum. And yes, we wish we'd done this sooner!

At the time of writing we have not received any funding, nor promoted the app via any paid advertising. However this may change in the future.

Absolutely yes! We won't have time, but please email us if you do.